Grateful for the Opportunity

Gallagher doesn’t think of himself as an award-winning teacher, because sharing the passion he has for the theater is just what he does naturally. He calls the recognition “humbling.”

“Winning this award reminded me of why I do what I do. I’m grateful for the award and grateful I get to have this amazing, rewarding job,” Gallagher says.

“My teaching is not about me. It’s always been about the students and perhaps that is what was being recognized,” he adds.

And where does that leave him? What’s next?

“Retirement?” he asks, back to joking mode. “Seriously, we have a lot of work to do yet here, and I’ll only be done when I feel as if I don’t have anything more to give to this program. It’s so good to be able to keep doing it.”

Gallagher did not initially aspire to be a teacher. He struggled in college at first due to a lack of direction and was ready to quit, but he was encouraged by his oldest brother to give it one more semester and to find something he liked and get involved.

When a friend dared him to audition for the musical that year at Shippensburg University, where he was majoring in Radio and Television Journalism, he did.

“I got a really good part—shockingly. Seriously, I didn’t know what I was doing,” he says. “And it changed my life.”

The new focus gave him direction, and he threw his energies into his minor, Theater. He spent a lot of time in the scenic shop and worked as a carpenter and welder as a graduate assistant.

“I owe so much to my mentors at Shippensburg—Dr. Paul Leitner and Professor Paris Peet,” Gallagher says. “They not only guided me through my academic career but also helped shape me into the mentor I am today.”

“All this work helped to inform my acting and directing because you have to have an intimate knowledge of every aspect of theater. Your job is to assemble a group of creative artists and keep them all on the same page, working in a collaborative way, and you can’t come at it from just one perspective.

“I have done everything you can do in the theater, except design costumes—although I did work in a costume shop! That’s critical to being the best director you can be and the best collaborative artist you can be,” he says.

Graduate school at Oklahoma State University came next, where he earned an M.A. in Theatre with a concentration in Directing. He found his first professional job with The Lost Colony in North Carolina. After working with other theater groups around the country, he landed at the Delaware Theatre Company, in Wilmington, Del., where he met his wife, Sarah, an actress and playwright and now a high school English teacher. Along the way, he continued to learn and hone the craft he has shared with Montco students since 2001.

Gallagher’s guiding principle is to give students the full theatrical experience. Everyone who joins the Theatre Arts Program learns to build scenery, work backstage and do other behind-the-scenes work as well as act and direct.

His teaching and directing inform each other; each is about collaborating, not dictating. Ideas and concepts are brainstormed and shared for every new project, following sometimes different and unusual paths that may not have been envisioned before.

Last year’s production of “The Visit” by Friederich Dürrenmatt, for example, a play with dark, comedic undertones, ended up being produced using puppets—not an intuitive direction in which to go.

“As I researched the play and the playwright, it became clear that puppetry would be an effective way to give the message,” Gallagher remembers. “I asked the class, ‘Puppets?’ and they ran with it, doing the research and design work.”

“The actors got to breathe life into the puppets,” says Davon Johnson, a theatre arts major, who was a set designer on the production and also acted the role of the teacher. “I appreciated the art and got to focus and notice different things. Dealing with puppets was a different ball game and felt funny at first, but really worked and was interesting.” 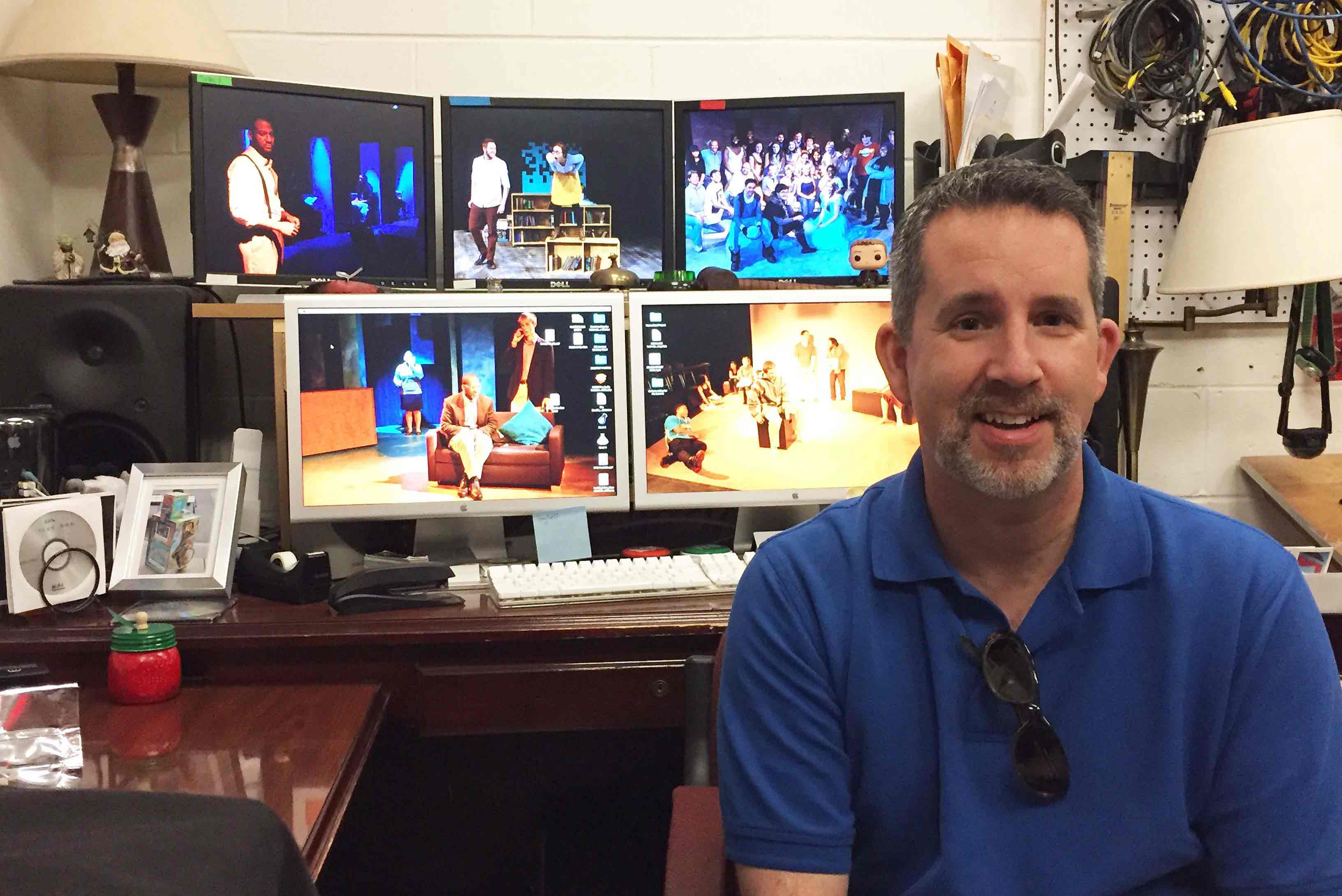 It’s all about teamwork

“Real collaboration is people having different ideas and having to hash them out,” Gallagher says. “I love working with creative people and having my ideas changed—it happens every day. I don’t lecture or deliver content. That’s not appealing and not effective. I ask them, ‘How are WE going to discover this or figure out the process,’ whatever it is.”

Gallagher says that it’s freeing as a teacher to let the walls down and admit that you don’t know everything.

“I learn a lot from my students every single day,” he says. “You can’t be false with students, and true collaboration is born from admitting that you don’t know it all.”

He adds that he always tries to treat everyone in the classroom as equals in everything he does, offer them choices and empower them to take ownership of their education and each project.

Johnson, 24, will graduate in December 2018 with a degree in theatre arts. He came to Montco originally in 2012 for engineering, but stopped to work for awhile. He returned when he realized he wanted to be an entertainer, and then he met Gallagher.

“Tim has opened my eyes to acting and creating as part of a whole and helped motivate me,” says Johnson, who worked as an intern in the Cultural Affairs Department, helping behind the scenes during concerts presented as part of Montco’s Lively Arts Series.

During Johnson’s last semester, he will intern with Theatre Horizon in Norristown as a production assistant.

“My perspective changed when I met Tim. I was never very good at school, but he’s been a good mentor, and I have been really focused here,” he says.

Gallagher’s humble nature notwithstanding, his students know how much he deserved the Pearlstine Award.

“The award was well-deserved. I’ve never seen anyone work harder than Tim and he is always pleasant. He teaches you about theater and life and is always there for you if you need him,” Johnson says. “He’s an excellent teacher, mentor and person and deserves all the accolades and praise that he gets.”