When it comes to the stain of racism and slavery in America, Dr. Aaron Shatzman, Dean of Social Sciences at Montgomery County Community College, believes its human nature to want to discover who is responsible.

“It’s also human nature to blame others,” he said, during the first session of The Richard K. Bennett Distinguished Lectureship Series, “Racism in America: Understanding the History of Slavery and its Impact on American Culture,” hosted by MCCC’s Lively Arts Series on Wednesday, Jan. 27

The origin of racism and slavery in this country, he said, “depends on who is telling the story and how it’s told.” What is clear though, is that the roots of this tragedy date back far into history, when European explorers first began sailing to the New World.

“The history of slavery began a long time ago. Systemic racism began over 400 years ago.” -Dr. Aaron Shatzman

The online seven-part series, facilitated by Dr. Fran L. Lassiter, MCCC English Associate Professor, delves deeply into why slavery came into existence and how it was constructed. Each session of the series analyzes the impact of racism and illuminates the efficient systems -- both dejure and defacto -- that were put in place to control and dehumanize African Americans, a system of segregation and discrimination that is threaded deeply into our social system, which still permeates in our society today.

Shatzman led the first session titled “Europeans, Native Americans and Africans: The Origins of Slavery and Race Prejudice in the Americas.” In his discussion, he traced the origins of slavery back to the 15th century and told the story of how the exploration of the New World helped lead to its rise in the Americas.

“If you were a visitor from Mars flying past Earth in the year 1400,” said Shatzman, “you would never have predicted Europeans would have become dominant over the next 200 years.” 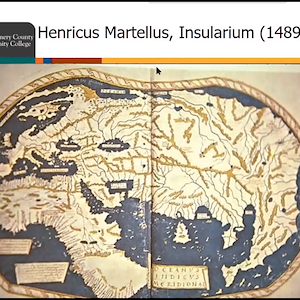 Europe at the time was in peril, as Christendom was losing ground in its battle against Islamic expansion. At the time, Europeans were desperate for spices for survival. Spices could preserve meat and were big business. However, trading for them over land meant enriching Muslim merchants and intermediaries along the way, since each made a profit as the cargoes slowly moved from Asia to Venice and then to consumers in Europe.

Yet the tide began to turn as Portuguese sailors slowly developed technology that allowed them to successfully navigate on the open seas. That in turn led to direct trade with Asian countries like India for spices and ultimately enormous wealth for Europeans who could sail to the East Indies and control the trade.

“Spices were so profitable,” said Shatzman, “a trader could send six ships, lose five and have one come back and still turn a profit.”

By 1492, King Ferdinand and Queen Isabella of Spain, looking to tap into the wealth Portugal had accumulated, reached an agreement with Christopher Columbus to sail west to India and bring back spices. Columbus had convinced his sponsors that, based on maps of the day, there was nothing but ocean separating Western Europe and Eastern Asia, since he believed, based on authoritative classical sources, that the Earth was smaller and the land mass of Asia much bigger than they actually are, “Columbus was convinced that he could reach the Orient before running out of food and water,” said Shatzman. 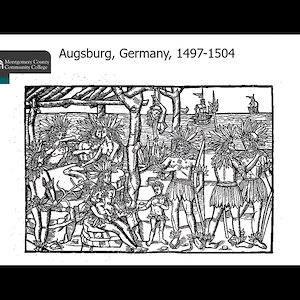 His arrival in the New World changed life forever. Between 1497 and 1504 the first drawings of Native Americans began to circulate Europe. The images were shocking, as they depicted beautiful naked people in classical poses (such as an iconic Madonna and Child) living together, with some eating human body parts. Spanish soldiers were sent to the New World to rule over the natives, prevent them from human sacrifice and cannibalism, and convert them to Christianity. Technically free, and subjects of the Spanish Crown, the native people nevertheless were compelled to provide tribute to and labor for their new masters, who, in turn, were required to protect and Christianize them.

The native people were not immune to the diseases Europeans brought with them and upwards of 6.5 million people died. As a result, the Spanish needed new bodies to fill the labor void. Africans were chosen, Shatzman said, because they were pagans, were not subjects of the crown, and through “a cruel trick of biology” were frequently immune to malaria. Hence, they had an ability to survive in climates that typically killed Europeans.

In 1619 the first Africans to arrive in an English colony in North America came when an English ship carrying Dutch letters of marque sold 20 Negroes captured from a Portuguese slave ship to the colonists in exchange for provisions. The settlers in Virginia struggled to survive. About 5000 English settler had come to Virginia before 1624. In 1622, a Native American attack killed 347 Englishmen. “(They killed) a quarter of the population of Virginia,” said Shatzman. By 1624, there were fewer than 1,300 people still alive. “Virginia was a death trap.”

Shatzman said the first slaves were, on paper, considered servants, since England had no status of slavery. Yet they did not receive equal treatment. White servants were forced to serve their masters for a predetermined number of years before they were granted freedom. If they escaped, additional years would be added to their contract. African slaves, however, were deemed more valuable and never given a set number of years of service. If they ran away, they were whipped after they were recaptured. Most were held for life, and family members of slave owners inherited slaves from generation to generation.

“The history of slavery began a long time ago,” said Shatzman. “Systemic racism began over 400 years ago.”

The “Racism in America” lecture series continues Monday, Feb. 8 at 12:30 p.m. with “The Construction of Race: Slavery, the Law, and Society.” The presentation will be led by Dr. Catherine Kerrison, Professor of History at Villanova University. The event is free and open to the public, but registration is required.