The American Scholastic Association presents this award to publications that are outstanding examples of scholastic publications in format, content, and presentation. 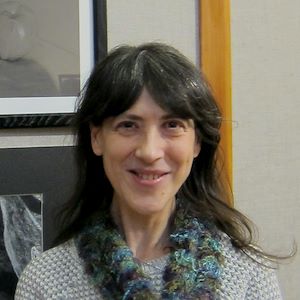 This accomplishment is especially meaningful for the students and co-advisors who worked tirelessly during the pandemic to put the magazine together, as well as for the many contributors whose work was highlighted within its pages.

“It seemed appropriate to name this forty-ninth edition of the Art & Literature Magazine ‘Transitions’ as it reflects the spirit of our times,” Santini wrote in her “Letter from the Editor-in-Chief” in the publication.

The theme, as she explains, means more than overcoming the challenges of the past year.

“Yes, we had to transition because of COVID, but the College is a place where you transition,” said Santini, a non-traditional student with an advanced degree in science who came to MCCC to explore and develop her creative interests as an artist and graphic designer.

As she notes in her letter, MCCC represents that “space, both physical and temporal, where we not only achieve our goals, but also learn, share, and become inspired to create, express, and become our new selves.”

For these reasons, she selected a photograph she took of colorful bricks for the magazine’s cover.

“I stepped out of the Fine Arts Center one day and saw the bricks decorated with chalk and thought they represented the transition from the outside to this colorful, rich environment,” Santini said.

She initially became involved with the magazine when Powers and Zotter-Mill needed someone to serve as the editor.

“I was new to the task, and I knew I had big shoes to fill since the 2018-2019 magazine won awards,” she said. “But, I also thought it would be a great opportunity to bring something new and fresh to the magazine.”

This year, the club decided to expand the size to 9x9 inches from 8x8 inches and to increase the number of pages to 96 pages to include more entries and incorporate brief biographical information for the contributors.

The planning process for the magazine starts when the club, which is open to all students, meets in early September. Their first task is to publicize the call for literary and art entries by making and posting flyers and sending emails.

“It’s much easier when we’re on campus and can visit classes or clubs to spread the word. This year has been more difficult since we’re remote,” said Santini, who is serving as the Editor-in-Chief this year, as well.

“For the next edition, we want to include animation entries, too,” she said. “We’ll be adding QR codes in the magazine that will link to YouTube where you can view the animations. The next magazine will be a double issue that will be printed in 2022.”

During winter break, the student staff reviews the entries and collaboratively makes their selections. For the 2019-2020 magazine, they selected 76 works by 45 contributors – from 190 submissions by 79 artists and authors.

“Fortunately, we had done most of the work and received the submissions before the closure due to the pandemic,” said Santini.

The next step, Santini said, was the layout and design of the magazine and the overall presentation of the entries, working with some of the contributors to adjust fonts or add colors to the literary work.

“After we received the final magazine from the printer, we had to figure out how to distribute it,” said Santini. “We met Tyler Steffy (Director of Student Life) and Sarah Schenk (Coordinator of Student Life) in the parking lot to drop off the magazines, which they handed out during the drive-in events during Weeks of Welcome.”

The entire process from promotion to selection, design, production and printing is a valuable learning experience for Santini and club members.

“I’m very proud of the work we’ve done, and I’m glad it was well-received,” said Santini. “This was a first for me, and it’s been a great opportunity.”