A new traveling exhibit, “Out on Campus: A History of LGBTQ+ Activism at Pennsylvania Colleges and Universities,” will be displayed during the upcoming weeks at Montgomery County Community College’s campuses.

Now through Jan. 22, the exhibit will be on display in the Health Sciences Atrium of MCCC’s Blue Bell Campus, 340 DeKalb Pike, Blue Bell. The exhibit then moves to MCCC’s Parkhouse Hall Atrium during Jan. 23-27 in Blue Bell.

From Jan. 30-Feb. 3, the exhibit will be on display in North Hall at MCCC’s Pottstown Campus, 101 College Drive, Pottstown. 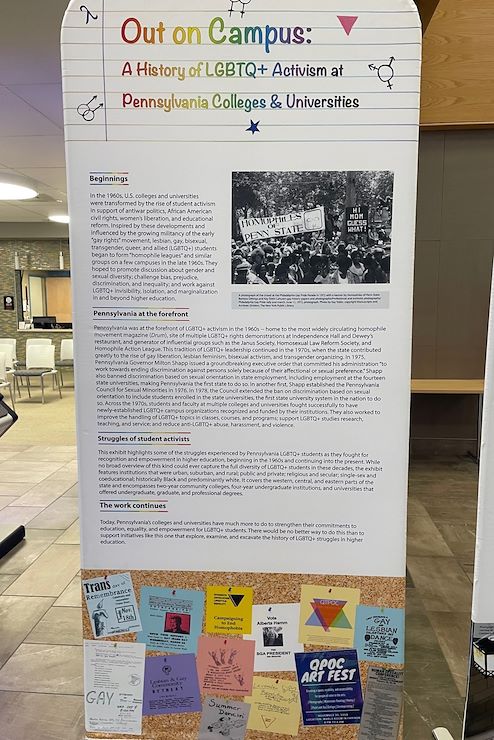 This exhibit presents the stories of the formation of some of the earliest LGBTQ+ student organizations and activism at colleges and universities in Pennsylvania, as well as experiences and personal stories of being openly LGBTQ+ on campus.

Visitors will learn about the largest documented LGBTQ+ civil rights student demonstration on a college or university campus in the nation before Stonewall, the first known openly transgender student government president in the nation, the university students who had to sue in order to get recognition for their student organization, and many more fascinating stories of LGBTQ+ campus activism right here in Pennsylvania.

“Out on Campus: A History of LGBTQ+ Activism at Pennsylvania Colleges and Universities” is presented as both a digital exhibit on the web, and a traveling exhibit, and will include stories of eleven colleges and universities. Additional material will be included on the exhibit web site. The exhibit began traveling to venues across Pennsylvania in September 2022. The digital version is on the web.

The exhibit is a collaborative project of the Pennsylvania LGBT History Network, with the LGBT Center of Central PA History Project serving as the managing partner. To schedule a public showing, contact history@centralpalgbtcenter.org.