After graduating with a master’s degree in developmental studies this year from one of the most prestigious universities on the planet, the University of Cambridge, Victoria Reeser set aside time to publicly thank some of the people who helped her get there: namely, the faculty at Montgomery County Community College.

Reeser, 25, who earned an associate’s degree from Montco in 2016, and is a 2019 alumna of the University of Pennsylvania, took to her LinkedIn profile page to post a photo of herself dressed in her hood and gown from the UK-based university to thank her Montco Family. 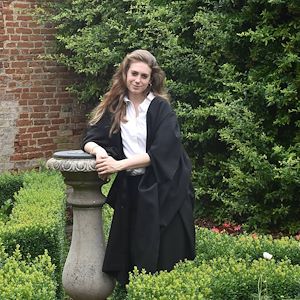 “[They] were the first people to believe I could attend the best universities, and prepared me to do just that,” she wrote. “I will always be proud to have graduated from community college because without my time there I wouldn't be here now.”

Her story is proof that with enough hard work, an Ivy League degree and beyond is possible for any student, if they want it.

Reeser’s story begins in Hatfield. Her dad is a pastor, school bus driver and interior house painter, while her mom is a homemaker. She is the oldest of three and was homeschooled through high school.

“It explains how I got to Montco,” she said of starting in the fall of 2014. “I’m familiar with non-traditional education. I didn’t really have the structural support to know how to go through applications to get into universities. I didn’t know what going to university was like. My first time in a classroom was English 101 at 9 a.m.”

Community college, she said, felt like the right fit since she didn’t have a purpose to go to a specific university. Her first day on Blue Bell campus felt like “butterflies with guns.”

“I remember first day of classes was nerve wracking,” she said. Until that point she was largely self-taught through individual reading. Unfortunately, that meant very few people to talk to about the material she was studying. “Going into Montco, I was learning about a whole bunch of things that were brand new, and having other people in the class to talk to was one of the biggest changes for me I would say. I was a talker in class.”

While she enjoyed the typical sizes of her class, between 10-15 students, which is rare for freshmen at a four-year institution, Reeser also remembers feeling like there was a steep learning curve compared to her classmates she’d need to overcome to be successful. Routine assignments like writing a paper, preoccupied her thoughts early on.

“I wrote one essay in my entire high school career; so I would be panicking about a two-page paper,” she said laughing. “I did it and did well, obviously, but it just took me longer to do. Eventually I came over that curve.”

Socially, Reeser wished she’d gotten out of her shell more by joining extracurricular activities on campus her first year. In her second year, she became president of the Archaeology and Anthropology Club and secretary of Phi Theta Kappa (PTK), the International Honor Society for community colleges.

“Those were awesome,” she said. “It was my first experience organizing events and hearing from guest speakers. I loved to have debates outside classroom. I ate all of that up. I was big into having conversations. I felt more connected to Montco as a community and not just a classroom. It’s a small place, so you really do get to know people.”

On to the Ivy League

Two years after sitting down for English 101, Reeser said goodbye to Montco with an associate’s degree in Liberal Studies in hand. Her plan was to transfer to a four-year institution to earn a bachelor’s degree in history but wasn’t sure where. That’s when Geography Associate Professor Samuel Wallace, who also served as a faculty PTK co-advisor with History Assistant Professor Catherine Parzynski, suggested she apply to the University of Pennsylvania.

At the time, when it came to the Ivy League, Reeser’s laymen’s understanding extended to Harvard, Yale and Princeton Universities.

“I went home and looked it up,” she said. “I knew about Penn Medicine. I didn’t know about the university. When I looked into it I knew I was meant to go there. I had a hard gut feeling going to apply.”

She did apply but was rejected from Penn because she sent the wrong application essay, she said. So she took a gap year and decided to pursue an “off the books” history project on “the history of sexuality in late antiquity Rome.” Parzynski agreed to work with her once a week and at the end of the project, she’d give a presentation to the History Department.

“I wanted to build my resume during my year off,” said Reeser. “It turned into bigger project that I used as my senior thesis at Penn. Montco is good for being an active resource if you want to use it.”

Parzynski had a glowing review of Reeser as a student.

“Victoria was tremendous student, and I am not surprised to hear that she has excelled at the two institutions she attended after MCCC,” she said. “I am so heartened to see the work she started at Montco was built on and completed at Penn. I personally think she would make a tremendous professor and I hope she goes on for her Ph.D.!”

Reeser reapplied to Penn the following year and started in the fall of 2017. She’d earned a scholarship allowing her to live on campus in the University City section of West Philadelphia. It was her first time living away from home.

Heading into the semester, Reeser said she felt confident in her abilities academically and prepared for the new chapter. The classes were more intensive but she soon adapted. This time the biggest hurdle she faced was interacting with classmates whom she’d met from different social classes.

“I had three roommates who came from wealth, who would spend $500 shopping like it was nothing,” she said. “I remember thinking ‘I have two jobs.’”

To this day, Reeser said she finds it difficult straddling between the lower and upper classes of society and feeling comfortable existing in both.”

“I walk between two worlds. I think about it a lot,” she said. “When I think about my time at Montco, there’s a lot I’d like to do to bring people with me. To share the information that I know and give back. To show that if you did these things, you could get into the Ivy League and Cambridge and other institutions. It’s a rarity. It’s hard to do that. This is part of my mission in doing that. As I was graduating from Cambridge, I was thinking about it. Why am I graduating from here? How did I get here? Because of community college. You can do it. It just takes a ton of work.”

“I quite liked it,” she said. “It was first year out as an adult, learning how to manage yourself as an individual. It definitely pushed me to understand field I was in. It is a very specialist kind of field. You can do a lot of things in it.”

In 2020, Reeser decided she wanted to go back to school and earn her master’s degree. Ever since she was a little girl she dreamed of studying in the UK and decided to make that dream a reality. She applied to several of the top schools in the country and received several acceptance letters before deciding on the University of Cambridge.

“It felt a lot more like what I wanted,” she said. The university offered a more personalized experience for her and catered to her needs for food, housing and studying.

“As an international student,” she said. “I wanted a space that was more welcoming and was created specifically so I could put my focus into the conceptual frameworks of reading and writing and the mental space required of that.”

Unfortunately, the pandemic put a wrench in her plans somewhat. Her experience at the university was limited to the confines of her room but she doesn’t regret the decision.

“I didn’t have a lot of big expectations. I wish I had more time to spend with people in a face-to-face way. I definitely learned what I wanted to learn,” she said. “It was the social aspect of it, which is important to Cambridge that was lacking, because of the pandemic.”

With a degree now in hand, Reeser said she’ll stay in the UK for the foreseeable future though she’d eventually like to come back home and work in city government. In the meantime though, she wants to thank her professors at Montco for helping kick start her amazing educational career. She hopes her story will serve as an example of how a community college education leads to great things for those willing to work hard.

“I want to be a bridge,” she said. “There are so many things I didn’t know about growing up. Before people telling me Penn existed or the field I’m going into now existed. It completely changed the trajectory of my life. I never liked when people talked down about community college. For me it was the place I learned about these things. A lot of me writing the post is that mission of wanting people to see you can do this. It is a possibility and I’m here if you want to talk.”