When he walked across the stage at Commencement this year, Leo Sereni joined a select group of students who have received an associate’s degree before finishing high school.

Sereni, 18, who lives in Phoenixville, is senior class president of Phoenixville Area High School and has been taking courses as a student at Montgomery County Community College in the dual enrollment program since the summer before his freshman year.

Combined with Advanced Placement courses he’s been taking at school, he’s earned enough college credits to graduate from MCCC with an associate’s degree in Liberal Studies. Sereni is set to attend the College of William and Mary as a James Monroe Scholar this fall.

“It is a very neat feeling,” he said. “Obviously not many high schoolers are going to be able to graduate college at the same time they’re out of high school. I feel very fortunate to have that opportunity.”

As a dual enrollment student, Sereni has been able to take both campus-based and online courses at MCCC, and the credits he’s earned are transferrable to any four-year institution. Students 15 years old and older can enter the program with classes offered in the evenings, on weekends and during the summer. (For daytime classes, students should check with their respective high schools to see if they can adjust their schedules to include college courses.) 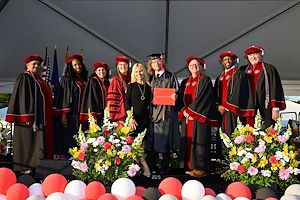 , Ayisha Sereni, a 1991 MCCC alum and former faculty member and administrator at the College, said she is proud of her son’s accomplishment.

“The dual enrollment program at MCCC helped Leo gain acceptance into a prestigious college and learn to handle the rigor of college courses while still in high school,” said Ayisha Sereni. “We’re all so proud of him and all he’s been able to accomplish.

Sereni began at MCCC with a speech communications class, taught by Communication Studies Assistant Professor Tom Donlan, and said he felt a mixture of nervousness and excitement leading up to the start. Despite being the youngest in his class, he felt welcome from the beginning and appreciated the way Donlan treated him like any other student.

“It was a departure from high school in that it was more egalitarian and equal,” he said. “In community college, you’re seeing people who are not just 18-22 years old. There are veterans, moms, older people, younger people and that continued over four years. There were business owners looking for help with their work and immigrants. It’s a huge variety of people that you meet and learn from. I think it’s a huge asset.”

Donlan, who worked with Ayisha Sereni on several committees when she was an employee, said he remembered her son as a student fondly.

“His public speaking skills were well beyond his years,” he said. “I’m glad he found my course useful. He was a pleasure to work with. I wish him well.”

Sereni appreciated the fact that community college courses allowed him to pursue interests he did not have the opportunity to pursue in high school. For example, he was able to take the concepts and theories he learned in his organizational psychology class and apply them to his role as captain of his school’s track and cross-country teams.

Sereni said he’s excited to begin his time at the College of William and Mary and feels privileged to be named a James Monroe Scholar. The distinction means he’s among the top 10 percent of the incoming class for the fall semester and will be eligible for grants and scholarships to subsidize internships during the summer and any research he may do while he’s a student.

He’s unsure of a major as of yet, though he’s leaning toward an eventual career in government and public policy or law.

“It’s balance of doing something that you love,” he said, “while finding something pragmatic that pays the bills.”

For now though, he’s focused on enjoying the moment and reflecting on the last four years of his life coming to an end.

“It’s a weird set of emotions,” he said. “There aren’t many times in life where you know you’re going through a milestone you’ll be looking back on. This is one of those times. I’m aware in 50 years I’m going to be looking back on this few-month time frame. It’s nice being able to think back on how everything was.”

He feels lucky to be able to celebrate his two Commencement ceremonies with relative normalcy, considering everything the previous two graduating classes faced.