The Revolutionary War era offered a crossroads moment in history, when the course of Americans’ lives was not fixed. Yet for slaves in this country, the freedom from tyranny the war’s end promised for white citizens, unfortunately did not extend to them too.

“Look at the Revolutionary era as a fluid moment in which the choices we make were not fixed. There were possibilities for change,” said Dr. Catherine Kerrison, Professor of History at Villanova University, during her follow-up lecture “The Construction of Race: Color, Condition, and Citizenship,” the third installment in the “Racism in America: Understanding the History of Slavery and its Impact on America Culture” series.

During her presentation Feb. 10, Kerrison focused on how, from the Revolutionary era through the antebellum period, skin color became determinative of a person’s condition as free or enslaved. This session traced how those formerly porous boundaries of condition become calcified, as whiteness became associated with freedom and blackness with enslavement.

“It defined the limits of citizenship,” she said.

White Americans become increasingly unable to imagine a republic composed of white and Black citizens. Defined out of citizenship and relegated to menial labor by the Civil War, Black Americans will face an uphill climb even after the abolition of slavery in 1865, she said. 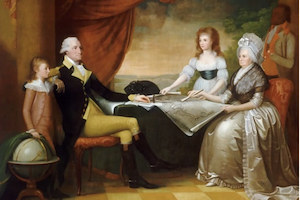 Life in slavery in the North was much different than from that in the South. It was a more isolating experience, in that they were mostly owned alone or in pairs by rich, white people living in cities and thought of as a status symbol, compared to the families of slaves living together on large plantations in the South.

“Children were not particularly welcome in northern households,” said Kerrison. “Space was at a premium.” 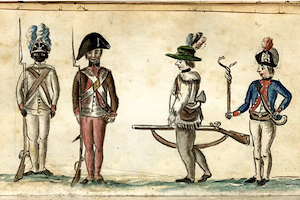 During the Revolutionary War, slaves fought on both sides in the hope of being guaranteed freedom. While George Washington at first forbade the recruitment of Black men in the Continental Army, as his troops withered during the winter at Valley Forge, he endorsed a New England recruitment effort.

Meanwhile, tens of thousands of escaped slaves in the South sought to fight for the British in the hopes of earning their freedom. The British, however, weren’t keen on recruiting slaves because they did not want to alienate white colonial loyalists who owned slaves.

“Slaves weighed their options to calculate how best to claim liberty,” said Kerrison. “The American Revolution represents the largest slave uprising in our history.” 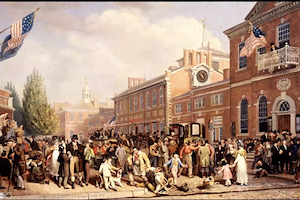 After the war, northern states slowly start to question the practice of slavery and ultimately began to end it. Evangelical Christians challenged its morality, claiming that, in God’s eyes, Blacks and Whites were brothers and sisters.

Economically speaking, in the Upper South, farmers diversified the crops they harvested to include wheat and other less labor intensive plants, needing fewer slaves to work the fields. Meanwhile, the lower South mainly continued to harvest the very labor intensive tobacco and rice plants.

“This is a fluid moment pregnant with possibility. There are challenges to slavery and they are varied,” said Kerrison. “They’re coming from all different sides.”

Laws in the North slowly began to change. In Pennsylvania, for example, the state legislature passed a gradual emancipation act that stated all children born to enslaved mothers would be granted freedom when they turned 28 years old.  It also mandated that slave owners register their slaves within six months or lose ownership of them. In addition, if slave owners brought their slaves to reside in the state for at least six months, the slaves were automatically granted freedom.

“It would take until 1847 for Pennsylvania to finally be rid of slavery,” said Kerrison.

While laws began to change, opinions of newly freed Black people did not among white people.

“There were white fears about what would happen if Blacks lived as equals in the Republic,” and Kerrison.

In the South, whites were emboldened by their refusal to eradicated slavery, and redefined meaning of skin color.

“This is an important cultural and legal development,” said Kerrison. “Until the Revolution, skin color didn’t necessarily denote condition of free or unfree.”

In 1806, the Virginia Supreme Court ruled in Hudgins v. Wright that skin color determined the condition of a freed and enslaved person.

“The law raised all whites over all Blacks. It gave all white people no matter how poor or politically insignificant they may be, an incentive to benefit from a system built for the rich and powerful. It gave whites outside and unable to participate in the system a stake to support it anyway.”

The crossroads moment, which could have allowed all men and women to truly be free, was lost, she said.

The series’ fourth session, “Abandoned and Violated: African Americans in the Jim Crow South, 1877-1945” will be presented by Dr. Theresa Napson-Williams, MCCC Associate Professor of History.

Napson-Williams will discuss the rise of Jim Crow, a system of segregation and discrimination that took hold in the South after Reconstruction. This lecture will illuminate the efficient systems-both dejure and defacto-that were put in place. Jim Crow policies sought to exclude and dehumanize African Americans as they moved through Southern communities attempting to work, to vote and simply to exist. In addition, the bodies of African Americans were violated through acts of violence- including lynching, race riots and an unequal justice system. Thousands of men, women and children, accused of crimes, dangled at the end of a rope. Others faced swift injustice in Southern courts. Jim Crow policies ruthlessly perpetuated and enshrined African American subordination throughout most of the twentieth century.

The live program begins online Wednesday, March 10, 2021 at 12:30 p.m. The event is free and open to the community, but registration is required. For more information, email livelyarts@mc3.edu.

Note: Images are courtesy of Dr. Catherine Kerrison from her slide presentation.