The laws and policies that have governed and supported racist attitudes against minorities for centuries are wholly baked into the foundation of this country. The very first statutes written serve as proof that race played a role in every aspect of life in Colonial America, from laborers and taxes, to sex and marriage, says one expert.

“It does not require racist intentions to produce racist outcomes,” said Dr. Catherine Kerrison, Professor of History at Villanova University, during her lecture “The Construction of Race: Slavery, the Law, and Society,” the second online session of The Richard K. Bennett Distinguished Lectureship Series, “Racism in America: Understanding the History of Slavery and its Impact on American Culture.” “A nation of well-intentioned people can still produce racist outcomes if they do nothing about these systems.”

During the first session of the series, Dr. Aaron Shatzman, Dean of Social Sciences at Montgomery County Community College, told the origin story of slavery in North America and how it paralleled the exploration of the New World beginning in the late 15th century. Shatzman ended his lecture on the shores of Jamestown in Colonial Virginia as the first slaves arrived in America.

Kerrison’s lecture picked up where Shatzman left off, by examining a series of laws passed by the Virginia House of Burgesses (the colonial assembly) and tracing the incremental and intentional steps that led to institutional racism in this country. Kerrison used Virginia as a case study to explain the attitudes across all of the colonies during this time.

With each law she presented, Kerrison asked two main questions: What are its deeper implications and what did the legislators stand to gain from it? She also explained why it is possible to have racist outcomes even without racist intentions:  that is, the way in which the law institutionalizes racist attitudes while it also promotes and legitimizes racist practices, in mutually reinforcing ways.

Among the laws Kerrison presented included gun ownership, gender roles among races, sexual relationships between races, and laws governing the unintentional death of a slave. 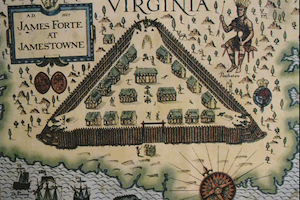 “The use of guns becomes a mark of white masculinity,” said Kerrison. “It’s one of many ways the House of Burgesses stripped African men of their concepts of masculinity.”

Kerrison drew a line from these laws to present day images of armed white supremacist groups parading through Charlottesville, Va. or the Michigan state capitol building. “They freely make their way through the streets and they also get to go home safely,” she said. 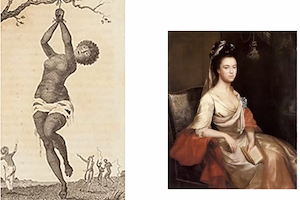 Lastly, one of the most culturally significant laws passed in 1662 dealt with the status of the children born from sexual relations between white men and enslaved Black women. The law reversed European tradition that the child would hold the same status as the father, which was to be a free person upon birth. Instead, the child took on the bonded status of their enslaved mother. In addition, if an enslaved man had a child with a woman of any race, he was stripped of paternity over the child.

The laws, Kerrison explained, protected English men from charges of rape, stripped the manhood of Black men, and created a system of reproductive labor.

“This is a bold attempt to naturalize the condition of slavery, make it heritable and embed it into the concept of race,” said Kerrison. “It gives the veneer of nature and biology. You’re born into slavery or freedom.” 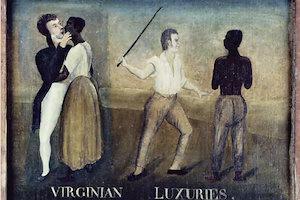 The 1662 law further stated if a white woman was found to have relations with a Black man, she faced a heavy fine, could be put into service and their child was forced into indentured service for 30 years. These laws were “meant to deter white women from having sex with African men,” said Kerrison, and “channel the desire of white women for white men.”

Lastly, the House of Burgesses passed a law in 1669 which stated that the unintentional killing of an enslaved person at the hand of their enslaver (or the enslaver’s agent) was not considered a felony charge. Their reasoning, Kerrison explained, was because you couldn’t presume malice in the case.

“What master would want to destroy his valuable property?” she said.

The law was expanded in 1705 to allow any white person to kill a runaway slave in any way they saw fit, whether the slave was their property or not.

“If you happen to kill accidentally in the service of upholding a system of enslavement, you are not accountable to the law,” said Kerrison. “This is the gift, as it were, that Virginia enslavers give to white people. To those not wealthy enough to afford slaves themselves.”

Kerrison then directly tied these laws to the Black Lives Matter movement and the killing of George Floyd.

“Black Lives Matter is an increasingly important cry that’s met with the response all lives matter. The question is what’s wrong with that?” said Kerrison. “What I’m hoping you’ve seen here is that Black lives have been devalued since the 17th century. It has created a white way of seeing that persists despite video evidence to the contrary.”

“Racism in America” is hosted by Montgomery County Community College’s Lively Arts Series. The online seven-part series, facilitated by Dr. Fran L. Lassiter, MCCC English Associate Professor, delves deeply into why slavery came into existence and how it was constructed. Each session analyzes the impact of racism and illuminates the efficient systems -- both dejure and defacto -- that were put in place to control and dehumanize African Americans, a system of segregation and discrimination that is threaded deeply into our social system, which still permeates in our society today.

Kerrison was scheduled to return for the series’ third session, “The Construction of Race: Color, Condition, and Citizenship.” In this follow-up session, she planned to focus on how, from the Revolutionary era through the antebellum period, skin color became determinative of a person’s condition as free or enslaved. This session set to trace how those formerly porous boundaries of condition become calcified, as whiteness became associated with freedom and blackness with enslavement.

This racialized regime comes to define the limits of citizenship as well, as white Americans become increasingly unable to imagine a republic composed of white and Black citizens. Defined out of citizenship and relegated to menial labor by the Civil War, Black Americans will face an uphill climb even after the abolition of slavery in 1865.

The “Racism in America” series presentations are recorded live via Zoom and are free and open to the community to attend, though registration is required. Recordings of each lecture will be available to view through May 15, at 11 p.m. For more information, email livelyarts@mc3.edu.

Note: Images are courtesy of Dr. Catherine Kerrison from her slide presentation.