For the 21 cadets from the Class of 2201 graduating from Montgomery County Community College’s Municipal Police Academy, it was a last chance to say goodbye to their classmates before they each go their separate ways to serve and protect. 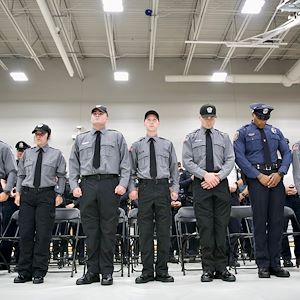 Dr. Gloria Oikelome, Vice President of Academic Affairs, congratulated the graduates for their achievement and wished them well as they begin their careers. 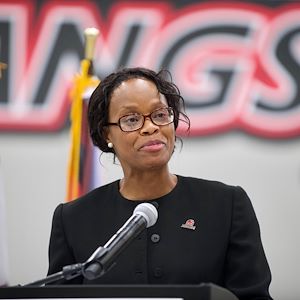 “It’s a challenging profession that you’ve each chosen to go into,” she said. “It is one that requires character and courage. We appreciate you choosing to serve in this way and as we send you out into your communities, remember the principles and values that this program has instilled in you.”

“These cadets that are seated before you worked extremely hard for 24 weeks of instruction, a total of 919 hours taking 26 written exams. It is a competitive process to enter into the police academy,” she said. “Before entering into the police academy, each Cadet had to successfully complete a psychological exam, physical exam, vision exam, reading comprehension and physical agility exam. They went through a rigorous interview process among other requirements.”

“This is not easy to go through, it’s a challenge,” Hill continued. “This academy is really a full-time job. The Cadets are here Monday through Friday 7:30 a.m. – 4:30 p.m., plus 14 Sundays for firearms training. They had to make many sacrifices: Time with their family, friends, personal time and for most, a paying job. Not everyone is capable of this undertaking. However, the Cadets you see before you were up for the challenge, and they crushed it.”

FBI Special Agent (retired) Scott Duffey, who served as the ceremony’s guest speaker, said he hoped the graduates end their careers in law enforcement with as much love as they have now as they begin them.

He also stressed the importance of training and reinforcing the skills the cadets have learned in the academy throughout their careers. He ended by telling the class to remember they are never alone in their job. They will always have friends, family and their fellow officers there to help them every step of the way.

Hill later recognized the individual accomplishments of the Class of 22-01. The Sgt. James R. Miller Marksmanship Award was given to Cadet Ross Burton, who scored an outstanding 98.41 percent overall average using three weapon systems. The Award of Distinction, which recognizes cadets who demonstrate the qualities of dedication and teamwork that motivate and ensure the success of the entire class, was given to Cadet Sergeant Andrew Amoroso and Cadet Nicholas Clark. The Professional Development Award, presented to a cadet who has shown the greatest overall development and improvement, was presented to Cadet Christopher Douglass. The Platoon Leader Merit Award, given to cadets who show leadership throughout the program, was presented to Cadet Lt. Justin Gannon and Staff Sergeant Marques Duprey.

Gannon, the class valedictorian, said he felt thankful for all the support the class 22-01 has received throughout their time in the academy from the various instructors to their individual friends and families. 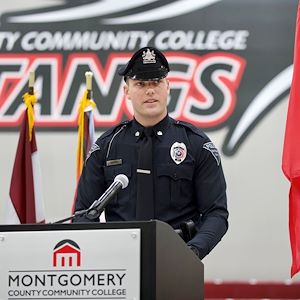 “The lessons we’ve learned will always guide us in the days ahead,” he told his fellow cadets. “Always remember to be humble, remember where you came from and remember to stay hungry. Look for new opportunities to grow. Learn and better yourselves along the way.”

The McGowan family started the scholarship fund in memory of their husband/father, Chief John J. McGowan, III, who died in a motorcycle accident in 2010. The scholarship is awarded annually to a cadet who has completed the program and is financing his or her tuition and has been helpful to many cadets over the years.

Daniel Czaplicki, of the Quest for the Best Foundation, awarded Cadets Rebecca Stratz and Kyle Mullen each with a $2,500 Quest for the Best Scholarship Award. Quest strives for a better tomorrow by providing funds and/or services to those who are committed to strengthening the common good of mankind.

Since 1973, the Police Academy has been the training center for more than 3,500 cadets with a consistent graduation rate of more than 90 percent. The 919-hour curriculum allows successful students to articulate up to 15 credit hours toward an associate degree in Criminal Justice. The Academy is certified by the Commonwealth of Pennsylvania through the Municipal Police Officers’ Education and Training Commission. Many of the Academy’s alumni serve as officers and in leadership roles throughout Montgomery County and the region. MCCC operates the Municipal Police Academy in the Health Sciences Center at the Blue Bell Campus.