A new interview series focused on spotlighting artists from across the region will soon be coming to a computer screen near you.

Montgomery County Community College is set to launch a series of online discussions with regional artists called "Artist Talks" beginning Friday, Nov. 13, at 11 a.m. with artist Mark Thomas Gibson via Zoom. The event is free and open to the public but registration is required.

As a painter and assistant professor at Temple University’s Tyler School of the Arts, Gibson will share his unique experience with those in attendance for the event, as well as the process he used to create and edit two illustrated books.

“He will take us through his artistic process, which is both technique-based and inspiration based,” said MCCC Galleries Director Patrick Rodgers. “I’m curious now how artists and especially teaching-artists having been going about their work and thinking about creativity in a time of lockdown and unrest.”

Gibson received a bachelor’s degree in fine arts from The Cooper Union in 2002 and his MFA from Yale University School of Art in 2013, where he was the recipient of the Ely Harwood Schless Memorial Fund Award. 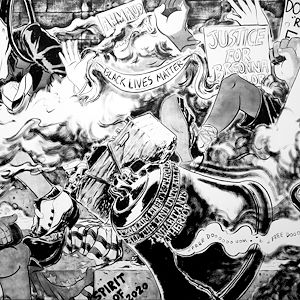 Gibson’s work was most recently on view in the solo exhibition The Dangerous One at the Rosenwald-Wolf Gallery at University of the Arts in Philadelphia. He has also exhibited at M+B in Los Angeles, Fredericks & Freiser in New York and Loyal in Stockholm, and participated in the group shows The Curator’s Eggs, Paul Kasmin Gallery, New York; Woke!, Contemporary Art Museum, University of South Florida, Tampa; and A Being in the World, Salon 94, New York, according to his website.

In 2016, Gibson co-curated the traveling exhibition Black Pulp! with William Villalongo at 32 Edgewood Gallery, Yale School of Art. The show examined evolving perspectives of Black identity in American culture and history from 1912 to 2016, and garnered reviews in The New York Times and Art in America.

Gibson also released his first book, “Some Monsters Loom Large” in 2016 with funding from the Foundation for Contemporary Arts. The book was recently re- issued in a second edition in partnership with International Print Center, New York. Gibson’s second book “Early Retirement” was released in 2017 with Edition Patrick Frey in Zurich and was acquired by the Metropolitan Museum of Art in New York, according to his website.

Rodgers encouraged MCCC art students to attend the Zoom event to see if they connect with Gibson’s teaching style and possibly decide if they’d like to transfer to Temple through MCCC’s transfer partnership.

The artist interview series began after the pandemic forced Rodgers to close the physical art galleries at the Blue Bell and Pottstown campuses for the foreseeable future. He asked art faculty members to recommend prospective guests for the new online series and credited Art Assistant Professor Michael Connelly for suggesting Gibson.

“(Thomas Gibson) is a fairly young artist. We’re catching him at a good time in his career,” said Rodgers. “I’m glad Michael Connelly made the introduction. I’m looking forward to it.”